There are some fantastic digital SLR cameras for first-time buyers, with Canon's EOS 1000D currently leading the pack.

Pentax's previous model, the K200D, couldn't match the Canon for quality and value but it had some unique features at this price, including a weather-sealed body and a passive LCD screen for displaying settings. It was also relatively bulky, which may have put some people off.

The K-m is slimmer and lighter, but Pentax achieves this by ditching the weather sealing, passive LCD, orientation sensor (for rotating portrait shots automatically) and wired remote and DC-in sockets. Another downgrade is that the K200D's 11-point autofocus has been replaced by a 5-point system, and the camera offers no feedback as to which point is being used for a particular shot (except when the centre point is selected manually). The K-m's competitors offer both manual and automatic AF point selection via illuminated markings in the viewfinder.

The colour screen plays a central role in controlling the camera. We were pleased to see dedicated buttons for ISO speed, white balance and exposure compensation, and a Help button provides context-sensitive advice for less experienced users.

The camera is responsive, but continuous shooting is a big letdown. In our tests it captured 2.8fps for seven shots, whereupon it slowed to around 1.7fps. Its competitors capture 2.6fps or faster until the memory card is full. Continuous RAW performance was also disappointing, capturing four shots at 2.8fps and then slowing to 0.6fps. Battery performance was even more frustrating. The four AA batteries are fiddly compared with a single Li-ion cell, and we found they ran out way short of the claimed 1,000-shot battery life. When we transferred the supposedly dead batteries into Canon's SX1 IS (full review next month), we found there was still enough charge to record half an hour of Full HD video.

The K-m's JPEG output is certainly eye-catching. Our test shots were bursting with colour, sometimes to the point of garishness, although this was easy to tone down with the saturation control. Details were striking, but a little overprocessed at times. Focus from the kit lens was reasonably sharp into the corners of frames, but heavy chromatic aberrations produced streaks of discoloration on either side of high-contrast lines. High-ISO performance was above average, with subtle noise reduction retaining lots of detail, but noise was more visible than in the Canon 1000D's pictures.

The K-m is not a bad camera, but it doesn't offer any advantages over the competition. For around the same price, Canon's 1000D offers better image quality, performance and features. 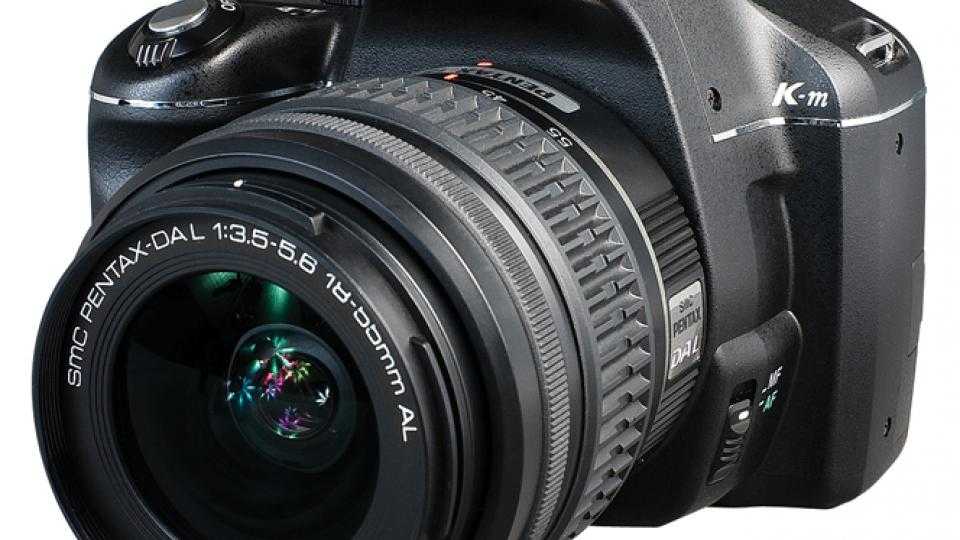