Barnes & Noble fired back at the Kindle today with a simple, 6″ touchscreen Nook that has a 2 month battery life and sits at 10% smaller than the Kindle 3. The new ereader also features an E-ink Pearlr display, a soft contoured back and a WiFi connection. This is designed to be a stripped down reader that will compete directly with Amazon’s offerings and sit below the current Nook and the Nook Color in B&N’s lineup. 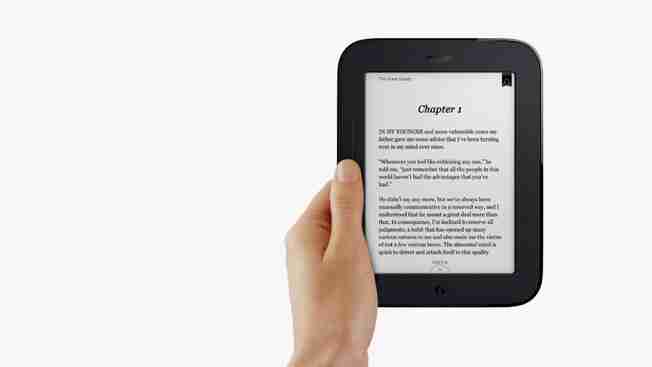 The new Nook is WiFi-only and features an on-screen keyboard. This allows it to be significantly smaller than the comparable Kindle. The touch screen is powered by IR technology and B&N promises a 50% better screen quality. One of the main features is 80% less ‘flashing’ when pages are changed. Its tagline is “The Simple Touch Reader.”

The new ereader runs on Android 2.1 and is powered by an 800Mhz TI OMAP3 processor.

Barnes & Noble also announced that the ‘Read in-store’ program has launched, which allows Nook users to read whatever they want on their device in any B&N store. In addition, Barnes & Noble announced Nook friends, which lets you share what you’re reading via Facebook, Twitter and email, as well as LendMe and ePub support. They will also soon launch myNookom, which is a portal that acts as your custom profile to share and connect with friends.

Fans of the Back to the Future trilogy may have noticed last week that Nike produced 1,500 pairs of the iconic glowing, self-lacing boots which appeared in the second of the three Back to the Future movies. 150 are being auctioned off on eBay each day, with all proceeds going to the Michael J. Fox Foundation for Parkinson’s Research. 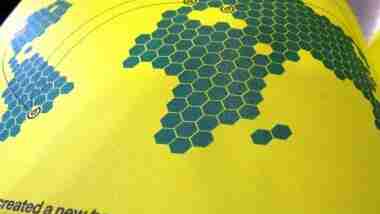 In the movie, Fox had to wear a battery pack with wires running down his leg for the self-lacing mechanism to work, so this feature was actually omitted on the Nike replicas due to the impracticality of the design.

Indeed, there have been countless cool inventions and gadgets brought to the world’s consciousness via movies, TV shows and popular culture in general.

Here’s a look at 10 of the best inventions that have yet to see the light of day…and many of these probably never will.

Okay, Click isn’t the best film ever. In fact, it’s probably not even the second or third best film ever. But there’s no denying you’d do some pretty desperate things to get hold of a remote control that can freeze time and also fast-forward past any unpleasant moments. Heck, you can even rewind life, though you can’t change events. Among its other features are a slow-motion and volume control facility…just think what you could do with all of that.

Well, we’re not suggesting you do what Adam Sandler does in this clip here, but you get the gist. It would be a pretty awesome contraption to have:

Wouldn’t it be great if you could get everyone to see life through your eyes and have them agree with everything you say? Okay, not ideal if you love a good argument, but if you like being right, then the Point of View Gun from The Hitchhiker’s Guide to the Galaxy would be sweet.

It can be used on anyone, and they will automatically see things from the perspective of the person that fires the gun.

If you hate long-haul flights and airport queues, and feel guilty about your carbon footprint each time you set foot on a plane, the Transporter from Star Trek is probably what you’re looking for. But alas, don’t hold your breath…

A car that works underwater as well as on land. And not any old car, a Lotus Esprit. We could probably dedicate a whole article to the many cool fictional inventions that James Bond has used, but this amphibious beauty from The Spy Who Loved Me has to be up there.

Wait a minute, this actually isn’t beyond the realms of possibility. Back in 2008, Swiss company Rinspeed launched the world’s first ever automobile that can be driven both underwater and on land. The sQuba is a fully functioning prototype that is hoped will go to market one day, but there are some inherent flaws. It’s a convertible, so the occupants have to breathe air carried in the vehicle through a Scuba-style breathing apparatus. Plus, there’s the little problem of getting wet.

It’s still pretty cool though, check it out:

Doctor Who – not everyone’s idea of a fun evening in front of the TV, but there’s no denying it’s a pretty popular programme. It’s one of BBC Worldwide’s flagship brands, selling to over 50 countries across the world. But whether you’re one of its many fans or not is irrelevant when assessing the Sonic Screwdriver – a small, portable, multipurpose device that can open almost any lock and can be used to magically fix almost any piece of equipment. Heck, it’s also a pretty effective weapon too if you’re into that.

Chances of seeing this hit the market? Slim to nil. You’ll have to settle for your Swiss Army Knife, but check the Sonic Screwdriver out for yourself here:

Classic. A car that talks to you, guides you through any number of tricky situations and can access pretty much any information you’re looking for. Everyone wanted KITT from Knight Rider, didn’t they?

In fact we’re probably not too far away from seeing something similar to KITT hit the roads. As we reported last year, Google has been testing self-driving cars, so throw into the mix a robotic voice and Google’s powerful search engine in the dashboard, then you basically have KITT. However, it’s unlikely to have that flashing, pulsing bar across the front of the car’s hood…and that’s what it’s all about really, isn’t it?

The above encounter from Total Recall probably won’t sell you on the idea of a robotic, automated taxi, but if they can improve on this in real life, then the inventor could be onto a winner.

Think about it. No more surly drivers, and no more small-talk. Johnny Cabs are fantastic in principle, and when they work they’d be great. They just need to create drivers that don’t take questions so literally…

The invisible car from James Bond’s Die Another Day would be cool, and it would help you avoid parking tickets, but the actual real-life use case of such a machine would be rather limited. Will a real life invisible car ever be built? I’ll believe it when I see it…if I can see it…

Have you ever done or said something you really wish you hadn’t? Have you ever wanted to completely wipe the slate clean…at least in the eyes of others? The Neuralizer from the Men in Black movies would help you out there. A quick ‘zap’ and all is forgotten.

Oh, and if you ever happened to watch the awful sequel to Men in Black, you could perhaps even use the Neuralizer on yourself…just a thought:

We all knew where this list was going. Everybody loves the Hover Board from the last two Back to the Future movies.

At the time, rumors abounded that the machines were actually real and it was only a matter of time before kids the world over would be hovering their way to school on their own four wheels. But alas, it was all a hoax and as you can see from this test video here, there were strings attached:

That hasn’t stopped a number of have-a-go-heroes from trying to build their very own Hover Board though. It’s a little crude and far less cool than Marty McFly’s contraption, but this shows what’s possible with a little imagination:

What have we missed? Are there any fictional inventions you’d love to see for real? Leave a comment below.

HP tested webOS on an iPad. It ran over twice as fast as the TouchPad.

HP’s WebOS team almost certainly had an idea that the company’s new tablet, the TouchPad, had very little chance of challenging Apple’s dominance in the tablet market, as the company’s webOS operating system was running “over twice as fast” on its rival’s iPad 2 tablet, a source close to the subject revealed to The Next Web. Update below. 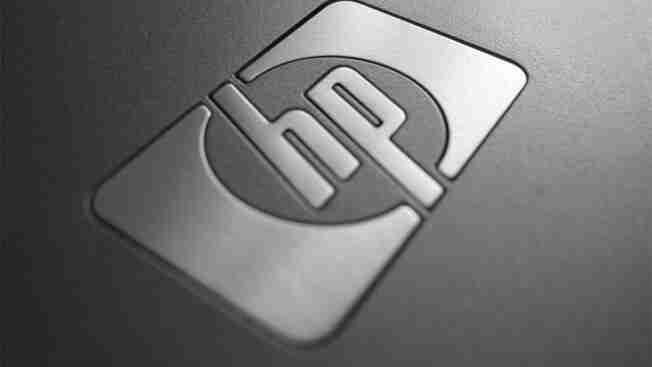 With HP announcing it is to cease development of its webOS devices , we learned that before the HP’s TouchPad tablet and Pre smartphones were even released, everyone within the webOS team “wanted them gone”.

The hardware reportedly stopped the team from innovating beyond certain points because it was slow and imposed constraints, which was highlighted when webOS was loaded on to Apple’s iPad device and found to run the platform significantly faster than the device for which it was originally developed.

With a focus on web technologies, webOS could be deployed in the iPad’s Mobile Safari browser as a web-app; this produced similar results, with it running many times faster in the browser than it did on the TouchPad.

When HP announced its acquisition of Palm, the computing giant had already built the TouchPad hardware that sits on the shelves today. Basically, the TouchPad was a two-year old piece of hardware that the webOS team equipped with their tablet-friendly platform.

Our source also indicated that HP also had plans to release a 7-inch version of the TouchPad, the TouchPad Go. This was already in production and before yesterday was expected to launch in the coming months. It is unknown whether it will ever see a public launch now. The TouchPad Go was seen as a better looking and nicer feeling device that had the potential to sell, with it believed that sales of the device would outpace the TouchPad’s if it had been released before its larger cousin.

We’ve also heard that HP in fact already had the next generation of TouchPad in the works. The details are very fuzzy here but we believe that it would be a lighter model with a higher-resolution ‘retina’ display and a metal body. Nothing out of the ordinary if HP truly wanted to make a splash with its next potential offering.

Because webOS is limited to working on the Qualcomm chipset, potential hardware partners would need to have a special version of webOS written for their hardware. This makes it hard to determine a likely licensee, but we know that HP has already been working on porting webOS to other architectures, including Apple’s A5 SoC.

With development stopping on future HP webOS devices, the webOS team face an uncertain future. HP has said it will license the platform, prompting suggestions that smartphone vendors including HTC and Samsung could look to the operating system given the recent developments between Google and Motorola.

If you are interested in reading how HP came to the decision to kill off its webOS devices and how different teams came to learn of the news, we suggest you look at our inside look at what happened .

Update: As reader Joshua Tewell points out in the comments below, webOS has and continues to run on other chipsets besides Qualcomm’s. This supports the fact that  webOS may have been adapted to other chipsets, but it makes the statement in the article above that webOS is ‘limited to working on the Qualcomm chipset’ inaccurate. Thank you for the information Joshua.

Just to clarify one more thing as well, we have heard that Enyo apps were tested on the iPad, although we were also specifically told that webOS was tested natively in some fashion on the iPad. It’s unclear which of these tests the speed estimate was based on.